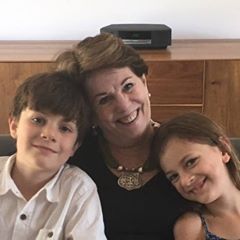 Rosemary Palermo studied Interior Design and Merchandising at Carnegie Tech (now Carnegie Mellon University) in Pittsburgh, PA. While still in school she married and had 2 sons. She and her family moved to Syracuse for 3 of the coldest years on record, leading to her vow to live in warm climates whenever possible.

At her retirement, her oldest son, with the US State Department, received a posting to Paris and she was invited to go along as the “grandmere au-pair” to her 3 year old grandson and 1 year old grandaughter.  She spent the next 3 years in the most beautiful city in the world, studying genealogy and history.

She returned to the US and settled in warm and sunny Long Beach, CA. One day she saw a PBS special called ‘The Book of Negroes’ and became curious about the character played by Cuba Gooding Jr.: Samuel Fraunces. When she went to research him, she discovered there was not much written about him and began researching. This led to her first book, ‘Black Sam’ Fraunces and other books have followed.